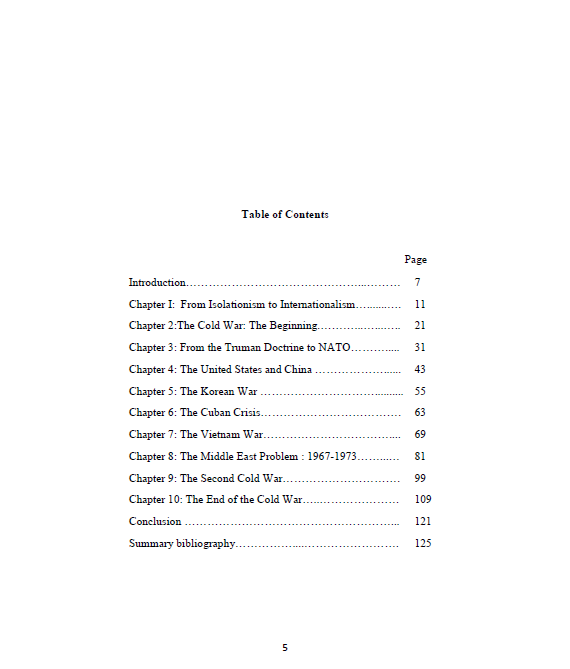 Post-war American history is a popular subject in different university departments worldwide. Students of American Studies, political science, or English language have to deal with the subject during their training in a measure convenient to their area of specialization. This manual is meant for fourth year students of the English B.A. programme in Algerian universities. The official course prospectus focuses on United States approach to world problems from the Second World War to the end of the Cold War corresponding roughly to the period 1945-1990. More importantly, it specifically singles out the study of the leading hot issues of the period while discarding American national domestic questions. This preference may be due to the fact that American home problems are more suitable topics for American Studies students than learners of English as a Foreign Language. Therefore, the political element of American history as a foreign civilization is the aim of the whole training of English undergraduates in Algerian universities.This reader is intended for B.A. and L.M.D. students taking American Civilization as a component of an EFL or ESL course. The manual reviews America’s approach to the post-war period from President Harry Truman to George Bush Sr, and the strategies they followed regarding the major Cold War crises. The book outlines the hot issues between the United States, the USSR and China from 1945 to 1990. To that end, it examines the situation in Europe, Asia, Central America and the Middle East including the arms race. In particular, the manual discusses the following topics: the German Question, Korea, Cuba, the Arab-Israeli wars, Taiwan, Vietnam and the end of the Cold War. The study shows that the Cold War came inevitably because of the age-old incompatibility of ideologies and national interests between the major superpowers. But, it also derived from the pronouncements and attitudes of fiery superpower leaders and warmongers on all sides reaching nuclear brinkmanship point at times. The Cold War players in the Eastern and Western blocs fought it out relentlessly and devotedly till the end in spite of occasional short pauses of ‘rapprochement’ and ‘détente’. Ultimately, the financial factor tilted the balance against the communist side for its inability to sustain the costly confrontation of the Cold War much longer.